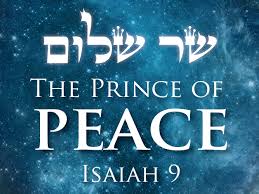 How can Jesus be the Jewish Messiah, since the prophet Isaiah predicted that the Messiah would be Sar Shalom, the "Prince of Peace?"

This has been a stumbling block to the Jewish people since the birth of Jesus some 2000 years ago. We were (and still are) expecting our Messiah to bring peace to Israel, and peace to the entire world. Since Jesus himself proclaimed "I came not to bring peace, but a sword," how then can he be the Jewish Messiah?

The answer lies in the words of Isaiah's prophecy just a few verses before in verse 6:

"For You have broken the yoke of his burden and the staff of his shoulder, the rod of his oppressor, as in the day of Midian."

The reference to the "day of Midian" points back to the victory that God gave to Israel in the days of Gideon. If you recall the story from the book of Judges, Israel was greatly oppressed by the Midianites, and God raised up Gideon to lead his people to victory - not by military might, ingenuity, or human effort - but by a miraculous victory that only God Himself could orchestrate.

The work of the Messiah is just like that.

God sent a child into the world - a Son, who himself would be the Mighty God, the Everlasting Father. This is why the New Testament refers to Jesus as "the image of the invisible God" (Colossians 1:15).  He would also be called "Sar Shalom" - the "Prince of Peace."

Two thousand years ago a child was born in Bethlehem. He was given a popular Jewish name - Yeshua (also pronounced Joshua, or Jesus). When that happened an entire choir of angels shouted "Peace on earth" to a group of shepherds in a field. The child of whom they sang would grow up and one day fulfill the rest of the Hebrew prophecies, concerning the need for sacrifice, and atonement for sin. He would be crucified, as a lamb led to the slaughter (Isaiah 53:7). As Isaiah goes on to tell us, "the punishment that brought us peace was on him."

Jesus the Messiah has brought peace on earth - already and not yet. He has brought peace to my heart, and to millions of others, both Jew and gentile, who have put their faith in him throughout the ages. We live in a time between the times - a time when true peace may only be found by embracing the Prince of Peace in faith and obedience to his Word. But the time is coming when "every knee will bow, and every tongue will confess that Jesus the Messiah is Lord" (Philippians 2:10-11). On that day there will be final, eternal peace on earth, as the prophet completes the prophecy:

"Of the increase of His government and peace there will be no end, upon the throne of David and over His kingdom, to order it and establish it with judgment and justice from that time forward, even forever" (Isaiah 9:7).

May the Prince of Peace bring you peace, hope, and joy!