Hanukkah - the Feast of Dedication 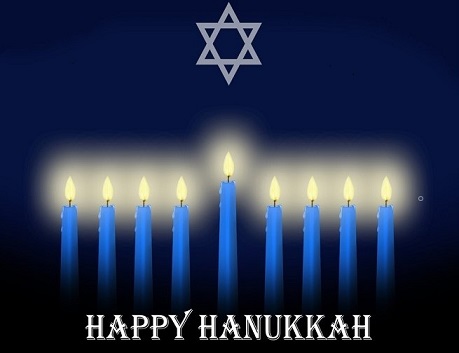 Hanukkah is a Jewish holiday that is observed for eight days starting on the 25th day of the Hebrew month of  Kislev, which may occur at any time from late November to late December. In modern times it is more commonly  known as the Festival of Lights, due to the tradition of lighting the Hanukkah menorah, a nine branched candelabrabrum. For most of us growing up in a Jewish home, Hanukkah was often viewed as the "Jewish Christmas."  We celebrated with family gatherings, parties, games (such as the Dreidel game), and traditional holiday foods.

Hanukkah cuisine is not exactly low calorie - it is always deep fried in oil! The generous use of cooking oil is a reminder of one of the miracles associated with the holiday - the miracle of the oil. I'll explain more about that shortly, however at this point it's important to say that the most important thing about Hanukkah is actually not the lights, food, or festivities. Hanukkah is a Hebrew word meaning "dedication," and the only Biblical reference to this holiday is actually found in the New Testament:

Now it was the Feast of Dedication in Jerusalem, and it was winter. And Jesus walked in the temple, in Solomon’s porch. Then the Jews surrounded Him and said to Him, “How long do You keep us in doubt? If You are the Christ, tell us plainly.” Jesus answered them, “I told you, and you do not believe. The works that I do in My Father’s name, they bear witness of Me. But you do not believe, because you are not of My sheep, as I said to you. My sheep hear My voice, and I know them, and they follow Me. And I give them eternal life, and they shall never perish; neither shall anyone snatch them out of My hand. My Father, who has given them to Me, is greater than all; and no one is able to snatch them out of My Father’s hand. I and My Father are one.” (John 10:22-30)

Although the historical record doesn't provide us with much information regarding how this holiday was observed at the time, one thing we can say with a fair degree of confidence is that it wasn't celebrated with the lighting of candles and the giving of gifts. It was about dedication.

It is this idea of dedication that I'd like to focus on.

The historical  background of Hanukkah is found in the books of First and Second Maccabees, which although not part of the Biblical canon, are considered significant accounts of Jewish history. In order to understand the events recorded in John 10 and the theme of Dedication that it teaches, it is important for us to have an understanding of the events surrounding Hanukkah, the Feast of Dedication.

A telling of the Hanukkah story must begin with the notorious historical figure Alexander the Great. At the age of twenty, Alexander inherited a group of Greek city states from his father Philip II of Macedon. Within 10 years he ruled an empire than expanded from the Balkans to the Nile of Egypt to the Himalayas, subduing tens of millions of people along the way. Alexander's conquests set the stage of world history for centuries to follow through modern times.

Upon his death, Alexander's kingdom was divided up between four of his generals. The land of Israel eventually came under the rule of a man known as Antiochus Epiphanes. The name Epiphanes is a Greek word meaning “manifestation” or “revealed,” implying that he himself was a revelation of one of the Greek gods. This man was not a friend to the people of Israel. He ordered the Temple in Jerusalem plundered and took all the sacred objects and everything of value that could be found. He later sent out a decree forbidding the Jewish people from worshipping the God of Israel, and went so far as to sacrifice a pig upon the altar in the Temple.

A rebellion soon broke out, led by a priest name Matthias and his five sons. His family and followers waged guerrilla warfare against the Greeks for the next three years, between 167–164 BC. During that time Mattathias died, and his son Judah became the leader of the rebellion.  Judah became known as Yehudah HaMakabi - Judah the Hammer.

Under his leadership the Jewish rebels eventually defeated the Greek armies and drove them out, reclaiming the land that God had promised to them. They set out to cleanse the Temple and rededicate it to the service of God, however there was only enough oil to keep the seven-branched menorah in the Temple lit for only one day. Although it took eight days to make more, according to tradition one day's supply of oil lasted for eight days.

This story forms the backdrop for the celebration of Hanukkah for eight days and why the symbol of light is so central to its observance. However, as important these symbols are, as we stated earlier, Hanukkah is actually a celebration of Dedication - not light. It is after all, the Feast of Dedication.

Hanukkah - the Feast of Dedication

Pronounced with a guttural "ch" sound (sometimes transliterated "Chanukah"), the root word is used seven times in the Hebrew Bible. It is always used to describe the dedication of a building or structure, setting it apart for service to God. Most often the term was used to describe the dedication of the Tabernacle or Temple in Jerusalem as the place set apart for the worship of the God of Israel. In the historical context of the Hanukkah story, however, it involved the re-dedication of the Temple. It had been defiled - used for things for which it had not been intended. Although it had been built for holy purposes, it had been desecrated, made impure. Re-dedication of the Temple would require effort on the part of the people. It would require such activities as cleansing, restocking, refocusing, repurposing, and reopening.

There is significant spiritual application here. Although there are several points worthy of discussion, I would like to focus on the main point of the passage, which is found in Jesus' statement "I and my Father are One." There are two subpoints to consider:

First, the context in which this statement is made is key to our understanding. The Jewish people were in the midst of commemorating a historical event centered around the madman Antiochus Epiphanes, who proclaimed himself to be a manifestation of god. This added fuel to the fire when Jesus made this statement, declaring Himself the manifestation of the One True God.

Antiochus has been dead for quite some time, however the spirit of Antiochus lives on and is active amongst us. The historical record of Hanukkah puts it this way:

Then King Antiochus sent word throughout his entire kingdom that everyone should act like one people,  giving up their local customs. (1 Maccabees 1:41)

The spirit of Antiochus is the spirit of compromise, the spirit of deception. It is manifest in the cultural pressures to compromise Biblical principles on the altar of conformity. The temptation and desire to be like everyone else - to accommodate - and thereby dilute, and ultimately defile our faith by allowing the world and culture in which we live to define that faith and what it means to live as a child of God. The record goes on to say:

Through what lens do we view the world around us?

As in the days of the Maccabees, so it is in our time. We would expect a multitude to conform to the spirit of our age. However, many of God's people today willingly capitulate to these same cultural forces. We are witnessing an unprecedented movement away from a Biblical worldview, at both the institutional and individual level. The lens through which we view the issues of our age profoundly affects our perspectives, and consequently the way we think, speak, and act. That lens affects the things we tolerate and accept as normal. The question is - are we looking at the world around us through the lens of Antiochus - culturally ubiquitous with our sense of morality rooted in popular opinion, or are we seeing things through the lens of scripture?

As in the days of the Maccabees, God's people are called to discernment, to resist the allurements and deceptions of the present age, and ultimately to repentance, and re-dedication.

This notion of re-dedication brings us to our second subpoint. When Jesus declared "I and my Father are One," he was alluding to a passage of scripture that was well known to the Jewish people of his day:

This passage is known to Jewish people today as the "Shema." It teaches that there is but one God. The revelation that there is only one God leads us to a singular dedication, a call to love him with all of our being. This is the message of Hanukkah! It is a reminder to us of our calling as followers of Messiah, as those called out to live lives that are honoring to our Father in heaven. Like the Jewish people of old, we are called to cleanse and re-dedicate the temple, although under the New Covenant, we are the temple:

Or do you not know that your body is the temple of the Holy Spirit who is in you, whom you have from God, and you are not your own? For you were bought at a price; therefore glorify God in your body and in your spirit, which are God’s. (1 Corinthians 6:19-20)

Hanukkah is a time of dedication. Jesus honored this tradition by His presence in the Temple during this holiday - the Feast of Dedication. Let us therefore take the time to examine our own hearts - to see ourselves through the lens of scripture and discern where we, like the Temple of old, require re-dedication to the Living God: cleansing, restocking, refocusing, repurposing, and reopening. May God richly bless you in your pursuit of Him!